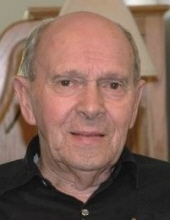 Arnold Levi Banik was born April 1, 1932 in Aberdeen, SD, to Gottlieb and Fredarica (Wolff) Banik. He grew up and attended school in Tolstoy, SD.

Arnold married JoAnne Thennis on January 28, 1952 in Aberdeen, SD, where they called home, participated in the community and raised their family.

Arnold was a member of First United Methodist Church, where he enjoyed volunteering in many areas. He was also a member of the American Legion, the Moose Lodge. Arnold helped with Meals on Wheels. He enjoyed golfing and his participation in the band, The Country Gents.