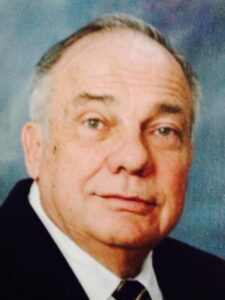 George graduated from Drexel University with a B.S. in electrical engineering. The next day he was shipped to Japan and assigned to the 7th Division, Company B, 13th Engineers, he then boarded a train to Seoul, Korea. He received the Bronze Star and Purple Heart.

He returned home, enrolled in Lehigh University and graduated with honors with an M.S. in electrical engineering and was elected to Eta Kappa Nu, the honorary electrical engineering-computer society. George joined the Philadelphia Navy Yard and worked in the modernization of the nuclear powered guided missile cruiser, The USS Longbranch, and the five new ships then under construction. He was a one time member of the pre-INSURV Board. George was promoted to the Head Valve Engineer and was responsible to search for new ways to reduce the costs of ship building and was chairman of the Joint Committee. As chief design engineer he was approached to serve on the Federal Ship Repair Council, as President he worked in obtaining new work and jobs for the Shipyard.

He worked with Senator John Heinz and Congressman Larry Coughlan and traveled to Washington to testify before Congress. George received the Four Chaplains Award of the Chapel of the Four Chaplains. He continued to serve with the Pennsylvania National Guard, the 103rd Engineer Battalion, 28th Division, Co. A. In 1959 he was presented with the Eisenhower Trophy for “Overall Excellence in Military Operations” as the outstanding Company in The State of Pennsylvania National Guard. He graduated from the “Command and General Staff College” and was promoted to Lt. Colonel, he also served as a Board Member of The First Regiment Infantry of Pennsylvania. George was an active member of St. Paul’s R.E. Church in Oreland. He was Father of three children, Keith, Roger and Karyn and Grandfather of 7. George coached Oreland’s Little League Baseball, Biddey Basketball and girl’s softball teams and is a member of the Philadelphia-Continental Chapter of the Sons of the American Revolution and an active member of Oreland Boy Scout Troop 411.