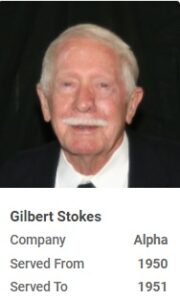 Gilbert Harold Stokes, 92, passed away September 3,2019 at his residence in the Keownville Community. He was born December 10,1926 in New Albany to Wallace and Vera West Stokes. He was a member of Mount Olivet Methodist Church. He retired from Home Insurance Company where he was a safety engineer, and after retirement he worked for his brother at Stokes Supermarket. He served his country in the U.S. Army during World War II and in Korea. He was a past Commander in the American Legion at post 72. He was a member of the Civitan International from August of 1991 to January, 2018 where he served on the Presidents Council. Gilbert was a community minded man who loved the New Albany area. He loved to travel, loved animals and loved the outdoors.  He is survived by his two daughters; Suzie Stokes Gibson (Michael) of New Albany, Mary Christina Stokes (Michael) of Jacksonville, FL; one son, John Lafayette Stokes (Dale) of Chattanooga, TN; two step daughters, Pam Dunlap (Bobby) of New Albany and Tracy Hodges (Rodney) of Tupelo; two grandchildren, Johnathan Cocks and Lendi Trautman; One special friend, Elsie Morrisette. He was preceded in death by his parents; his first wife, the mother of his children, Maria Lopez Stokes; his second wife, Barbara Hodges Stokes; one sister, three brothers and one grandchild, Michael Hodges. In honor of his service to his country United Funeral Service will fly the U.S. Army flag during visitation and service. In lieu of flowers donations can be made to ASPCA, the Alzheimer’s Association or the ALS Association.